Not a lot of time to post, but here are the highlights from Day 4 at the Connecticut Open.

Here is a gallery from ATP and WTA All-Access Hour and media availability today at the BNP Paribas Open, as well as a few from some practice sessions as the bigger names arrived on site.

Didn’t get the chance to shoot a lot of match action today, but there were some fun features from the media hour. When you take a step back, it’s crazy to see moments like the above, with the world’s best so close to each other.

Here are some photos from a busy day yesterday at the Connecticut Open.

Here are the highlights from an incredibly busy day four at the Connecticut Open. It’s good to be into the main draw, and the chance to shoot some bigger name players. Another busy one today!

Here is a selection of photos from a busy day three at the Connecticut Open. This is a mixture of pictures from the WTA All-Access Hour media session, Kids Day, and action on the court.

These are photos from the two semi-final matches at this year’s New Haven Open. Both were great matches with some nice opportunities for pictures.

This was another busy day which had me running every which way around the grounds. This is a quick bite of everything I shot on Day 7.

There wasn’t much time for me to shoot on-court action on Day 6. Instead, I was mostly occupied with off-court events, promotions, and corporate and sponsorship photos needed for the tournament.

These are a few that I did manage to get from the day’s tennis action.

I’m here in the terminal in the Palm Springs airport, in the middle of a long delay that was just announced when I got here at 4:30 this morning. I can already feel my tan fading, and it seems like I’ll be welcomed back to Boston later tonight with a fresh dusting of snow.
Since I have some downtime now, I wanted to take this opportunity to post my photos from all the championship action yesterday, and to reflect a bit on my experience over the past two weeks working as a photographer and videographer for the 2013 BNP Paribas Open.
Yesterday was a crazy day, but a thrill to be on hand to shoot those final points and player portraits with the trophies. I’m particularly happy with the images I got of Rafa as he won championship point. I definitely chose the right spot to be in.
Overall, I worked harder, longer hours at this tournament than at any other one I’ve done in the past. One guy covering an entire Indian Wells Tennis Garden’s worth of courts was a grind, particularly during the early rounds when there were so many matches going on. You’ll never hear me complain about warm weather, but it gets hot out here in the desert when you’re lugging all the photo gear up and down stadium steps all day.
I was brought here to work hard, though, and I wouldn’t change that for anything. I loved every second of it, even the crazy moments where it felt like I had to be in four places at once. After all, it’s a privilege to shoot for one of the biggest and most important tennis tournaments in the world, and to meet and work alongside some of the world’s most talented photojournalists that I’ve admired for a long time.
As I’ve recently said quite a bit, I’m making a big push this year to improve my video skills, and this tournament was a fantastic experience in conceiving a concept, shooting it, then editing it sensibly and concisely under tight deadlines. Just from the past two weeks, I feel a lot more confident in my abilities as a video journalist, and I’m proud of most of the pieces I produced. My videos and photos also landed me some nice bylines, included in both the New York Times and the Los Angeles Times.
Finally, and most importantly, it was wonderful to re-connect with old friends and colleagues, and to meet so many new ones. Over my whole career, I’ve been extremely lucky to work for and learn from the best in the business, and the BNP Paribas Open was no exception. I owe a huge thanks to Matt Van Tuinen and Jeff Watson, the MVTPR stars and masterminds behind the BNPPO media operations, for giving me this opportunity and for breaking me into unfamiliar territory. Also, thanks to the rest of our team – Nick McCarvel, Pete Holtermann, Fred Sidhu, and Craig Gabriel – for their creativity, tennis expertise, and help throughout the tournament.
Last but not least, thanks to you all for reading! Sorry I cluttered your news feeds with posts over the past two weeks. I’m off to find some breakfast. 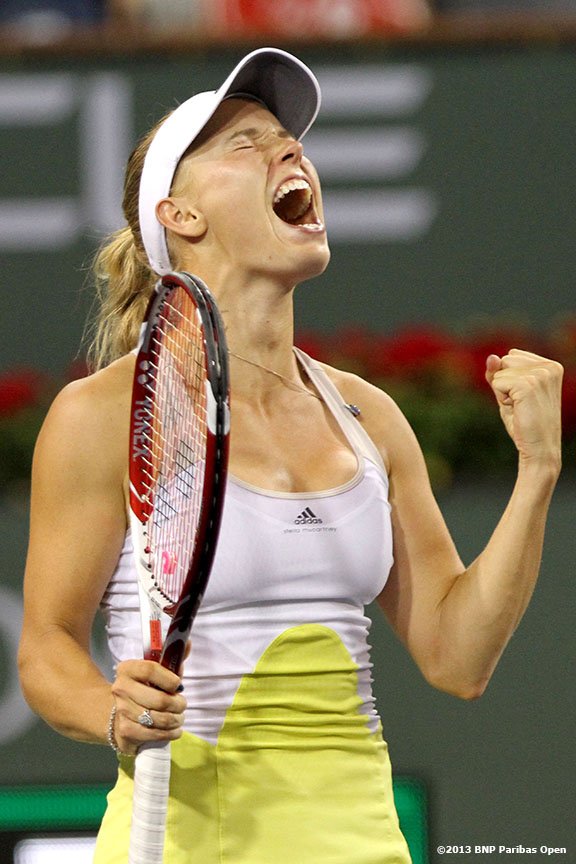 Here is a selection of photos from quarterfinal and semifinal action on the men’s and women’s side of the 2013 BNP Paribas Open. We’re deep into the tournament now, so at this point, the photos become more about emotion and reaction rather than straight about straight tennis action.
Additionally, I’ve posted a video from an incredibly unique opportunity I had to follow Roger Federer and Rafael Nadal as they were escorted from the locker room to the court before their quarterfinal match two days ago.
What I love best about the work that I do is the experiences it allows for. These intimate moments before a sporting event of international interest are rarely seen, and it was incredible to witness that first hand. The entire journey took about three minutes, but it seemed to all happen so quickly. A memorable assignment for sure.
This video I shot and edited follows their journey.
More to come from all of today’s action!