Game 1 of the 2018 World Series is in the book and it goes to the Red Sox! Overall, I didn’t have the best night shooting. Should have shot loose on the Nuñez home run to get the full reaction. But it’s all good, we look ahead to game two tonight.

We’re back in the World Series! The Red Sox won again in Houston in game five, taking all three games in Houston to win the American League Championship Series 4 games to 1 and advance to a spot in the 2018 World Series. This is huge.

I had a great time shooting the game and the celebration after. Clinch games like these are always long, grueling, and not as easy as it looks from the outside. It takes hours of preparation, logistical planning, working with others to make sure you’re in a position to get what you need. Once the win happens, it’s nonstop shooting for hours, and then straight to packing all the gear and clothes to get  on a plane and fly over night. I’m feeling exhausted, but looking back at these photos, I’m also feeling lucky to be in the position I am.

Wow is all I can say! What an incredible game. I’m not sure if it’s the baseball itself or just the grind of the post season, but each game seems to get more exhausting. I’m glad we came out on the right end of this one. There were some great moments which translated to great photos, all the way down to the final out.

Here are my photos from game four of the American League Division Series between the Boston Red Sox and the New York Yankees. Wow, what a game, and what a night to be a part of. After a strong start by Rick Porcello, a collaborative bullpen effort including an eighth inning appearance by Chris Sale, and timely hitting, the Red Sox held on to win 4-3 and clinch their spot in the American League Championship Series against the Houston Astros. After the game, the celebration was in full force on the field and in the clubhouse. These nights are so fun to shoot, and last night was a special one. We flew straight home after the game and I was in bed by 5 A.M., so I’m exhausted right now. Time to relax for a night before getting ready for what should be a wild series against Houston.

Here are photos from game one of the 2018 American League Division League series against the New York Yankees. It was a good one! Red Sox were able to hang on for a key game one win. The atmosphere at Fenway Park was great to witness. I’m excited for game two tonight!

Here are photos from game one of the 2018 American League Division League series against the New York Yankees. It was a good one! Red Sox were able to hang on for a key game one win. The atmosphere at Fenway Park was great to witness. I’m excited for game two tonight!

For the third straight year, the Boston Red Sox are champions of the American League East division. Mookie Betts led the charge last night in a back and forth game that finally ended in an 11-6 win against the Yankees.

This was the end result of a long, hard week of work. A lot of preparation goes into every game to set ourselves up to be in a position to get the images we need. We arrive hours early to the ballpark to remote cameras, figure out access and security, and scope out spots to position ourselves. It was frustrating to go through that process twice only to lose the first two games, but that made last night all the sweeter. A big thank you to Yankees photographers Ari and Barrie for being so accommodating and helping us get the shots we need. It was also great working along our team Staff Photographer, Matt Thomas, as well as the rest of our Creative Services team who made the trip down.

I’m back home now, but on the train ride home found myself thinking about how lucky I am to be a part of a special team and organization like this. Three division championships in three years doesn’t just happen in baseball, and I don’t take for granted the fact that I get to document a team of this caliber. Let’s hope for a deep run into October!

Xander Bogaerts doubled, stole third, and scored the go-ahead run in the eighth inning of last night’s game to give the Red Sox a win and a series sweep over the Toronto Blue Jays. J.D. Martinez and Rafael Devers both homered for Boston. Before the game, a special pre-game ceremony was held in recognition of Childhood Cancer Awareness. 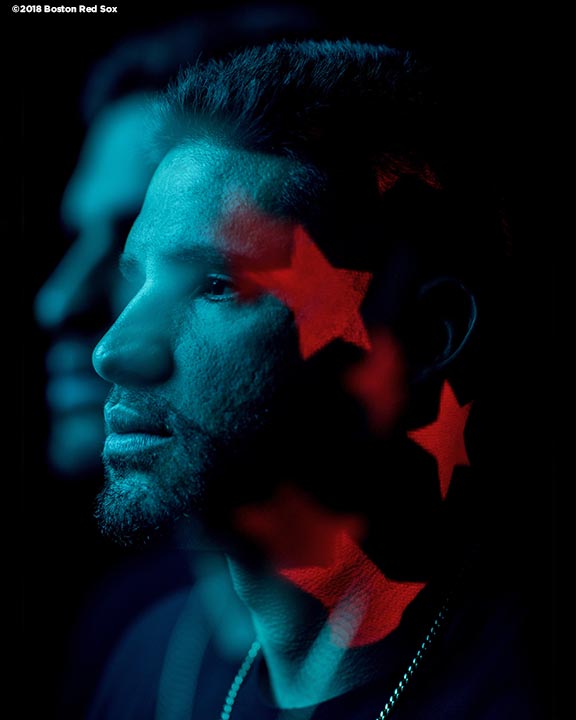 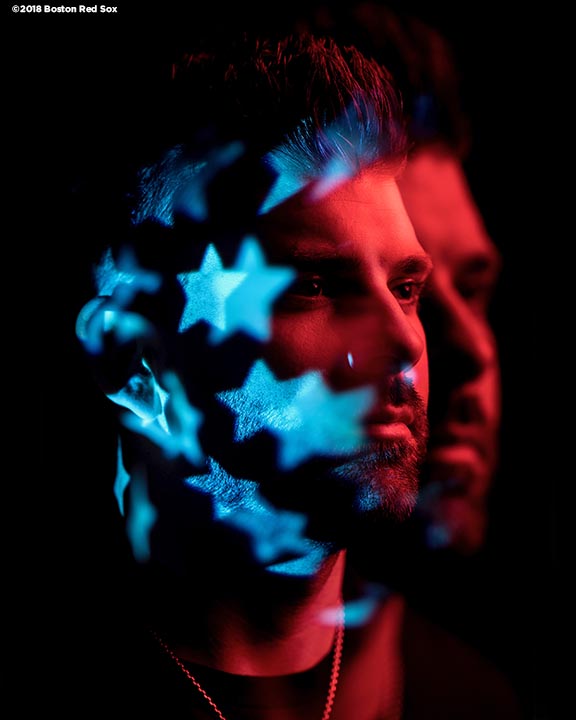 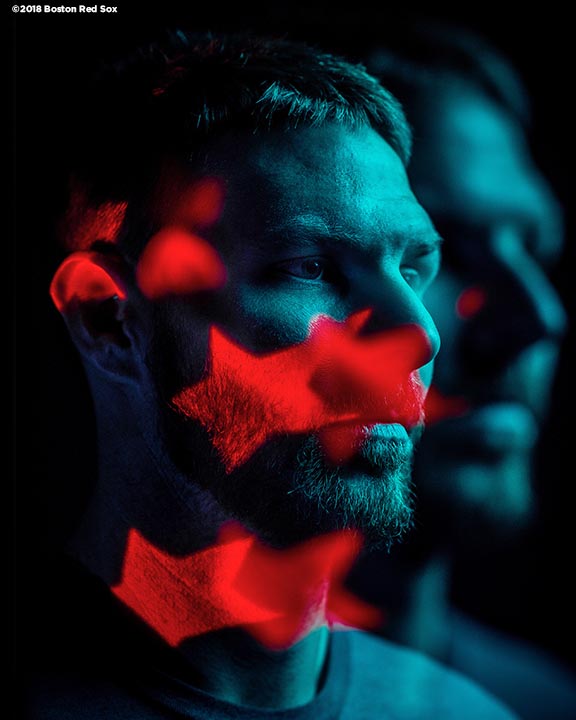 Here is a set of recent portraits I shot to promote the Boston Red Sox 2018 All-Stars – J.D. Martinez, Mitch Moreland, Chris Sale, Mookie Betts, and Craig Kimbrel. I used a projector beaming an image of stars onto the subjects combined with off-camera gelled strobes and multiple exposure to achieve the look.

I’m happy with how these turned out, and I’m looking forward to exploring more based off of this technique! Thanks to the players for their time.

J.D. Martinez, Mookie Betts, Mitch Moreland, Chris Sale, and Craig Kimbrel have arrived in Washington, DC for the 2018 All-Star Game. They participated in media availabilities and workouts at Nationals Park after arriving on Sunday night.